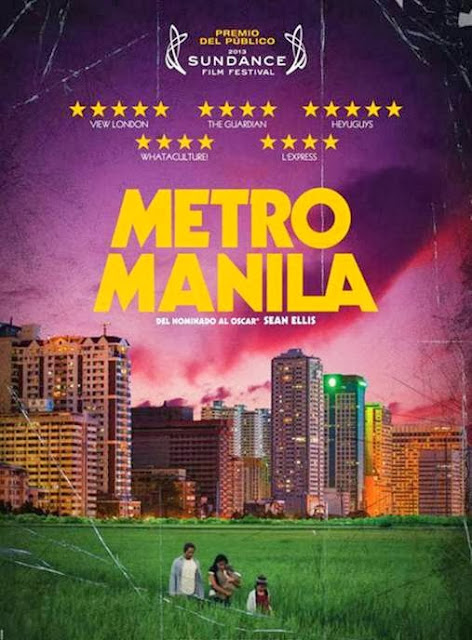 I can’t shake off the feeling. There’s dread and melancholy in my mind, and I am finding myself in a state of morbid depression. After a hiatus of several months, I am compelled to write again for the sake of catharsis, because I find none of that where Sean Ellis’ Sundance-favorite, “Metro Manila” is concerned.

When rice farmer Oscar Ramirez (Jake Macapagal) realizes that he couldn't even afford to buy seedlings from the sale of his newly harvested “palay”, he briskly decides to uproot his wife Mai (Althea Vega) and their two children from Benguet to the big city to seek the greener pasture that the fields have denied them. They soon learn that the concrete jungle is an even more hostile environment. Opportunists abound and the weakling eventually gets crushed into mangled carcasses. Mai decides to apply as a bar girl while Oscar is looking for a job. Fate gets kinder when Oscar falls under the good grace of Douglas Ong (John Arcilla), an armored car security driver who soon grooms Oscar as his right hand man. The latter lends him shirt, buys him food, hustles a fake driver's license, and even finds him a more suitable home away from the slums of Tondo. No sooner do we realize that there’s more to Douglas’ overbearing hospitality. Isn't money a universal motive why people do the things they do? Oscar and Douglas’ armored car carries oodles of them day in and day out. Then the plot thickens. 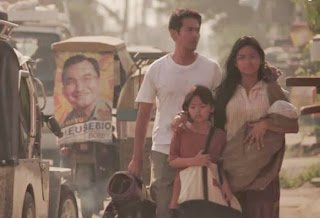 In my years of watching films of different genre, I've learned that one of the characteristics of a great film is its ability to linger long after leaving the cinema. Such intensity hobbles and dawdles – then it putters like a log hanging down your psyche, banging into your heart. This is Sean Ellis’ “Metro Manila”.

Unfortunately, I feel that it’s for the wrong reasons. While we totally embrace social realism, for how else do we face the future if we don’t keep our eyes wide open to the painful truths happening around us, we abhor sheer hopelessness. And that is what ultimately constitutes the film. There are 95 million souls in this country, but there aren't 95 million tales worth telling.

Social realism, to become a valid story, has to elicit a glimmer of hope. But where is hope in a homecoming punctuated with a dead husband? Is stolen stash worthy as a source of inspiration? Moreover, great stories have redemptive value. What is redemptive in a husband who hardly winces when he learns that his wife has started peddling her body before salivating customers? Yet when his only “friend” Douglas (John Arcilla), who has helped him find gainful employment and a home, asks him to punch his time card, he has the gall to even joke, “Baka mapapasama tayo dyan!” At this point, when Douglas tells him to lick his ass, shouldn't he be licking away until his friend tells him to stop? After all, his wife is already gyrating naked in front of horned out men. When the narrative element of conspiracy eventually sets in, should Oscar still be on a moral high ground? How dare he allow his wife sinking briskly into moral quagmire while he refuses to get his hands dirty? If that isn't the hallmark of a spineless, albeit unsympathetic husband, I don’t know what is. 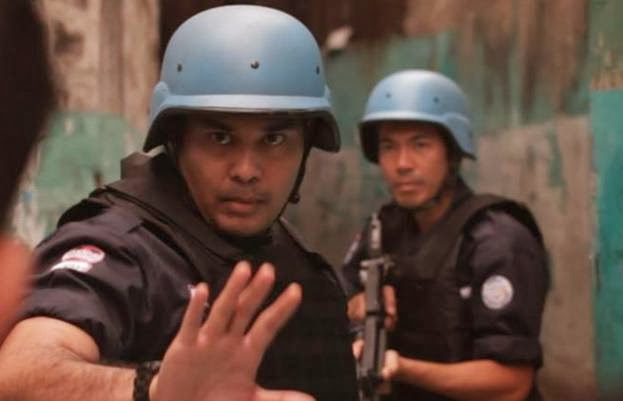 The story has head-scratchers from the start. When Oscar bravely risked the well being of his family by taking them to the harsh city without a friend or an assured roof under their heads, you would question his mind set - Reckless, to be kind? Or an idiot, to be more appropriate? Who relocates his family to the big city with just under P2,000 and not a hint of a dwelling?

In “Metro Manila”, British director Sean Ellis visualizes an urban landscape cloaked with apathy, almost reflective of the “Gates of Hell” voiced out by novelist Dan Brown (“The Da Vinci Code”); traffic almost shuts down to a halt; tenements teem with roaches, wide gaping ceilings, rusty fences; hookers who get kidnapped in public avenues; heck, even children are depicted as heartless creatures (three boys are shown torturing a kitten). Every member of the populace is an opportunist so when you’re handed what is perceived as help, it isn't.

While I understand that all these constitute the thematic essence of a fictional dark world called “Metro Manila”, I am gripped with a confounding pessimism for the story being told. And this will shake your faith on what’s otherwise called Pinoy hospitality or the vaunted good-natured quality of this so-called people. Scratch that notion. Metro Manila is a world of despicable people. Everyone is as ugly and "nanggigitata" as the dilapidated buildings that rise over shanties.

True, Sean Ellis gets his shot for brilliant story telling. He weaves a compelling tripe that won’t let you leave your seat as you’re gradually sucked into his narrative maelstrom. Jake Macapagal has always been known to play it down even in the theatrical world where he proudly hails. His tentative demeanor as the naive farmer is perfect for his early scenes, but as the story moves forward, it becomes clear that Macapagal’s passivity is really a reflection of his awkward grasp of character. We don’t see him evolve even when he indolently turns to the other side. Didn't serving 4 years in the infantry teach him a whimper of a grit? John Arcilla, hailed by many impressionable minds as “brilliant”, is actually too obvious. Had he tried subtlety a notch lower, the effect would have been chilling. We knew from the get-go that he was this slimy SOB who wanted something out from his staged kindness. Then there’s the side story involving a bullied man named Alfred Santos (JM Rodriguez) and his rather silly parachuting parable. Rodriguez looked so effete he might as well shout “Darna!” when he jumped off the plane. And who successfully carries a handgun on a commercial plane? Aren't there any other ways of escaping other than jumping off planes?

Bottom line here is, “Metro Manila” has turned Metro Manila into a mythical city replete with squalor and hopelessness; where predators continuously prey on the innocent. The urban landscape is dark and putrid and filled with figurative decay that goes way beyond architecture. Ellis paints a squalid metropolis that’s downright grotesque and unseemly, and he has succeeded to take this image to the United Kingdom and Sundance with much acclaim. After all, this tale about a lawless, rotting Asian city of whores and thieves called Manila becomes Britain’s ticket to the Oscars derby. How will the Brits and the world's cineastes see the real Metro Manila after this? Not flattering, that’s for sure.

While I realize that Ellis isn't in the industry of making a propaganda about Philippine tourism, he conveniently makes Manila the poster child of the perfectly petrifying third world in all its grimy desperation. Just a few weeks ago, Mes de Guzman's "Ang Kuwento ni Mabuti" eked out a deceptively simple tale of an innocent grandmother (Nora Aunor) in far flung Nueva Ecija in almost similar moral dilemma. Yet the narrative fabric didn't exploit destitution or poverty which is a major highlight in Ellis' flick.

A friend who saw this earlier told me he liked the hopeful tone as it wrapped up its story. Huh? Rappler’s Carljoe Javier referred to the flick as “something to be enjoyed.” Oh wee… How does one find enjoyment, hope or inspiration in a tale where the protagonist succumbs to the dark forces? That his wife returns home with a dead husband, a stolen loot, and a broken soul? In a pessimist’s world such as “Metro Manila”, I come home with a heavy heart.
Posted by Cathy Pena at 1:11 AM 13 comments: