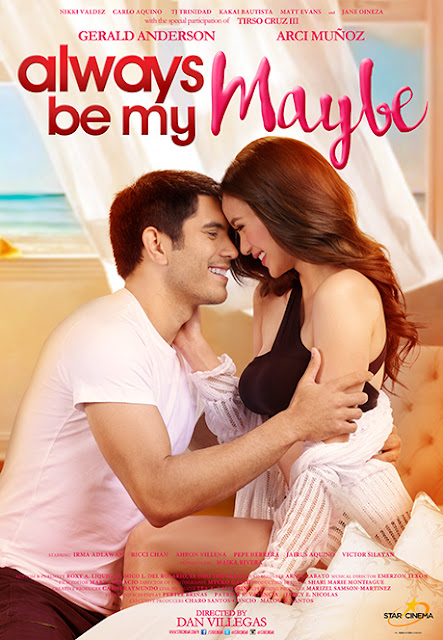 In what could be one of the year’s most adorable cinematic turns, Arci Munoz plays Tintin, a makeup artist-cum-beauty vlogger who wears her heart on her sleeve. In online videos, she shares beauty tips and laces them with no-holds-barred stories about her heartache. But after getting spurned by her occasional lover (Victor Silayan) for another girl, Tintin breaks down in a video episode that went viral. Six months later, she meets a kindred soul Jake (Gerald Anderson) who himself is heartbroken. Their awkward meet-up turns into an engaging overnight gabfest that eventually settles into comfortable companionship. Have they conveniently friend-zoned their relationship? After all, they admit to not being attracted with each other. Or aren’t they?

Dan Villegas’s “Always Be My Maybe” delves into the mechanics of contemporary couplings through the unlikely friendship of two characters who are trying to pick up the pieces of their broken hearts after their respective relationships have failed. What’s instructive is the conflicting points of view on the different stages of hooking up. I am reminded of the situational dilemma in Cathy Garcia-Molina’s insightful “Unofficially Yours”. This could be its companion piece.

More than anything, the narrative is a precarious reflection of the current sexual mores that pervade in modern-day romance. While intercourse used to pretty much define a relationship (i.e. “definitions” are made before consummation), these days, such emotional scrutiny is taken into consideration post-coitally: did he cuddle, did she stay longer than necessary, was there discussion on the state of affairs? Permissive society has become the norm, instead of being the exception. I do have qualms about a few of the scenes. When Jake shows his studio to Tintin, asking her to pose for him, she offers to show her tattoo – and more, and in the process ends up shedding off all her clothes. So much for sensible and pragmatic cinematic heroines, right? As Jake would rationalize it, “sex is different from making love”, but such is the excuse of cads who just want their concupiscent catharsis.

Interestingly, the character of Jake seems too comfortably close to home for Gerald Anderson. Was the character written with him in mind? One would suspect because Anderson essays his role with sincerity and charm. Moreover, you could sense a morsel of danger in his dealings with Tintin. Is it the nature of “man” as the sexual creature that’s coming into the picture? Anderson is easily “pa-fall” without doing much. His ability to transcend this beyond the celluloid is impeccable. He would be remembered for this role. It doesn’t hurt that he has this easy, albeit complementary chemistry with Arci Munoz. 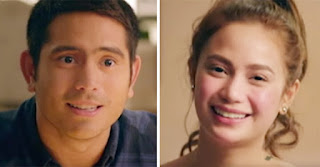 Munoz, on the other hand, hits the cinematic jackpot. She has triumphantly tempered her depiction of an acerbic heroine with just the right emotive concoction. I keep laughing every time I hear her complain about Valentines Day: “Sino bang nag-imbento nun… ipapatumba ko talaga!”

If there ever was perfect characterization, hers would be the new gold standard. By this, I am saying that, after watching the film, it would be hard to picture another actress playing Tintin. Munoz absolutely disarms, you can’t help but root for her despite occasionally embarrassing choices. Munoz owned Tintin’s every candor, manner and style. She’s the modern-day Filipina who loves wholeheartedly - body, mind and soul. In her moments of belated epiphany, she laments, “Di ko alam, naibigay ko na pala ang lahat.” Sometimes, loving isn’t counting how much you’ve shared of yourself. We sometimes throw caution to the wind so we can love without restriction, beyond fences and borders. But in this dilemma, there is a cautionary tale. Emotional investments, like finances, don’t always make great returns. When they do, we’d all be in the moon for it. Thus I am tempted to submit this as specimen for any sociological study concerning norms of contemporary relationship. It isn't exhaustive but it is a valid physiognomy of the subject.

Director Dan Villegas succeeds to spin a discerning yarn that more than entertains. The script bristles with fresh and astute observations about life and relationships in modern society. The pace is brisk and snappy; the cinematic palette clean, the music unobtrusive. The supporting characters (Jane Oineza, Ricci Chan, Cacai Bautista, Victor Silayan) are a delightful coterie of meme-spewing souls you’d want them on your side when life begrudges you of a few smiles. The movie is funny, provocative, sexy, and current. If cinema makes you re-examine your relationships, then it would be the worthy medium for your time and patronage. “Always Be My Baby” is solid entertainment and should not be missed.

Posted by Cathy Pena at 2:19 PM No comments: